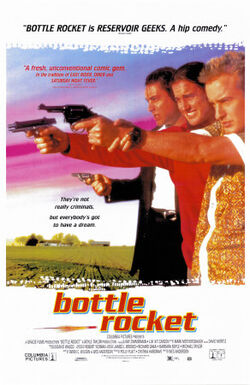 Bottle Rocket is a 1996 comedy film directed by Wes Anderson, in his feature-film derectional debut. It was co-written by Anderson and Owen Wilson. As well as being Wes Anderson's directorial debut, Bottle Rocket was the debut feature for brothers Owen Wilson and Luke Wilson, who co-starred with James Caan and Robert Musgrave. The film was a commercial failure but launched Anderson's career by drawing attention from critics. Director Martin Scorsese later named Bottle Rocket one of his top-ten favorite movies of the 1990s. The entire film was shot in Dallas, Fort Worth, and Hillsboro, Texas.

Bottle Rocket is also the name of a short film, shot in 1992 and released in 1994, directed by Anderson upon which the feature-length film was based.

Note some characters appeared in scenes which were deleted.

Retrieved from "https://wesanderson.fandom.com/wiki/Bottle_Rocket?oldid=4489"
Community content is available under CC-BY-SA unless otherwise noted.