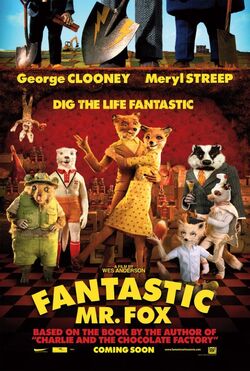 Fantastic Mr. Fox is sixth feature-length film written and directed by Wes Anderson. Based on the children's book of the same name by Roald Dahl, the story focuses on Mr. Fox (portrayed by George Clooney) and his family as they face the repercussions of robbing the farms of three farmers. It was released on November 29, 2009 and is currently available on DVD and Blu-ray.

The story of Mr. Fox, his family, and his community of woodland creatures. Despite his intentions to become more responsible, Mr. Fox cannot resist returning to his farm raiding ways, but then he must help his community survive the farmers' retaliation.

For Your Consideration Version

Retrieved from "https://wesanderson.fandom.com/wiki/Fantastic_Mr._Fox?oldid=4185"
Community content is available under CC-BY-SA unless otherwise noted.