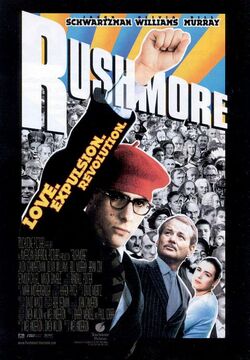 The movie helped launch the careers of both Anderson and Schwartzman, while establishing a "second career" for Murray as a respected actor of independent cinema.

Rushmore won Best Director and Best Supporting Male awards at the 1999 Independent Spirit Awards while Murray earned a Golden Globe nomination for Best Performance by an Actor in a Supporting Role in a Motion Picture.

By Michael Saplenza
Retrieved from "https://wesanderson.fandom.com/wiki/Rushmore?oldid=4488"
Community content is available under CC-BY-SA unless otherwise noted.