Start a Wiki
The Darjeeling Limited 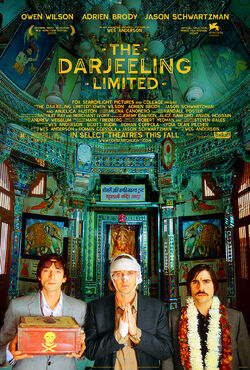 The Darjeeling Limited is the fifth feature-length film written and directed by Wes Anderson. The story focuses on three brothers (Jason Schwartzman, Owen Wilson, and Adrien Brody) as they embarque on a soul-searching journey on a train through India after the passing of their father. It was released on October 26, 2007 and is currently available on DVD and Blu-ray.

After their father passes away, three estranged brothers meet up on a train named "The Darjeeling Limited".

Anderson also wrote and directed the 2007 short film Hotel Chevalier, starring Jason Schwartzman and Natalie Portman. The 13-minute film acts as a prologue to The Darjeeling Limited. In it, Jack's ex-girlfriend turns up unexpectedly at his hotel room in Paris, and they spend the night together. Originally attached to festival screenings of The Darjeeling Limited, it was removed during the limited theatrical release and instead made available on Apple Inc.'s iTunes Store as a free download. On October 26, 2007, Hotel Chevalier was removed from iTunes in favor of releasing it in theaters with the wide release of The Darjeeling Limited.

Retrieved from "https://wesanderson.fandom.com/wiki/The_Darjeeling_Limited?oldid=4495"
Community content is available under CC-BY-SA unless otherwise noted.