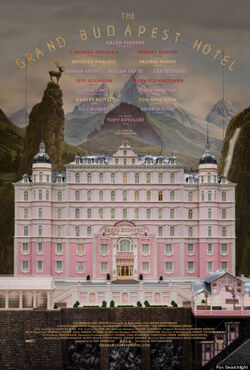 The Grand Budapest Hotel is a Wes Anderson film currently in theatres. Anderson wrote and directed the film, which will be his first full-length feature entirely shot in Europe. It was produced by Anderson along with Scott Rudin and Indian Paintbrush’s Steven Rales.

The film was released on March 7, 2014. It premiered as the opening film of the Berlin International Film Festival in February 2014.

In 1920s Europe, a famed hotel concierge by the name of Gustave H. is bequeathed a painting called Boy With Apple after his one night stand, Madame D, is killed. Madame D's son, Dmitri, vows revenge on Gustave by framing him for Madame D's murder. Zero Moustafa, the lobby boy, and his love interest, Agatha, help Gustave hide Boy with Apple from Dmitri and the authorities. Also, Bill Murray's character, M. Ivan, is the manager of Grand Budapest's rival hotel, Excelsior Palace.

Retrieved from "https://wesanderson.fandom.com/wiki/The_Grand_Budapest_Hotel?oldid=4493"
Community content is available under CC-BY-SA unless otherwise noted.