Start a Wiki
The Royal Tenenbaums 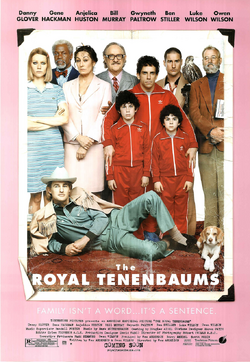 The Royal Tenenbaums is a 2001 dramedy film directed by Wes Anderson. It stars Bill Murray, Ben Stiller, and Owen Wilson. The film follows the lives of three siblings who are very successful in their youth, and experience sadness after their father leaves them during their adolescent years. The film is known for its ironic and absurdist style of humor, as well as its "storybook" filmmaking style that would later lead Anderson to be regarded as a stylistic auteur.

The Royal Tenenbaums received highly positive reviews from many film critics, who saw it as a worthy follow-up to Anderson's previous 1998 effort, Rushmore. The film holds an 80% "Certified Fresh" rating on Rotten Tomatoes, as well as a 75/100 weighted average score on Metacritic.

A poll by Empire magazine ranked it the 159th greatest film ever made.

The Royal Tenenbaums was released on July 9, 2002 on DVD as part of the Criterion Collection. The same company released it on Blu-ray on August 14, 2012.

Retrieved from "https://wesanderson.fandom.com/wiki/The_Royal_Tenenbaums?oldid=4519"
Community content is available under CC-BY-SA unless otherwise noted.